“Nothing and no one will stop us!” So says President Nicolás Maduro of Venezuela, a nation embroiled in the worst economic and humanitarian crisis in the modern history of Latin America.

That message came in a flurry of recent tweets in which the unpopular Maduro seeks to rally support from his long-suffering population for his latest remedy against total collapse: gold.

For years, Venezuela largely depended on revenues from its vast oil reserves, but production has about halved since 2015, compelling Maduro to cast his eye toward his country’s other natural riches in a desperate quest for revenue.

He’s engaged in a chaotic attempt to revive and expand mining within a huge sweep of tropical jungle called the Orinoco Mining Arc, prompting the U.S. government to impose sanctions that specifically target Venezuela’s gold trade.

Wildcat miners and other impoverished Venezuelans have flooded into the area in search of jobs and income. Battles for control over gold mines between criminal organizations, Colombian guerrillas and Venezuelan security forces have erupted, causing what the International Crisis Group calls “a spate of mass killings.” Local media have reported at least 10 people killed in the last two months alone. It’s believed many more deaths go unreported because the location is remote, communications are poor, and people are fearful of reprisals.

Venezuela’s economy is in free fall. The International Monetary Fund estimates hyperinflation could hit 1 million percent this year. Much of the population lives in extreme poverty. There are dire shortages of food, medicine, electricity, water and — despite all those reserves — gasoline.

Venezuelans are fleeing their homeland in droves, mostly to neighboring countries: 3 million have left since 2015, according to the U.N. refugee agency.

Yet their nation is known to have some of the world’s largest gold deposits, many of which are beneath the soil of the “mining arc,” along with diamonds, coltan, bauxite and other riches.

The arc is a wide band of rough forested land that runs south of the Orinoco River and stretches across the country’s midriff, from Guyana to Colombia. It covers more than 43,000 square miles — slightly larger than Tennessee — and comprises about one-eighth of Venezuela’s land area. 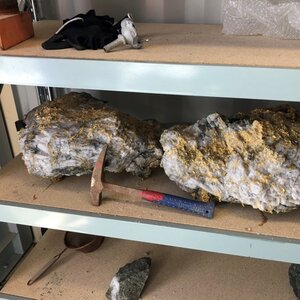 In February 2016, Maduro created a “strategic development zone” within the arc and claimed that “the projections of experts” indicate the area could contain more than 7,000 metric tons of gold.

When Maduro talks about Venezuela’s gold mining, it sounds like a smooth-running world in which government and mining outfits operate joint ventures, in compliance with environmental and labor laws.

The reality could hardly be more different. 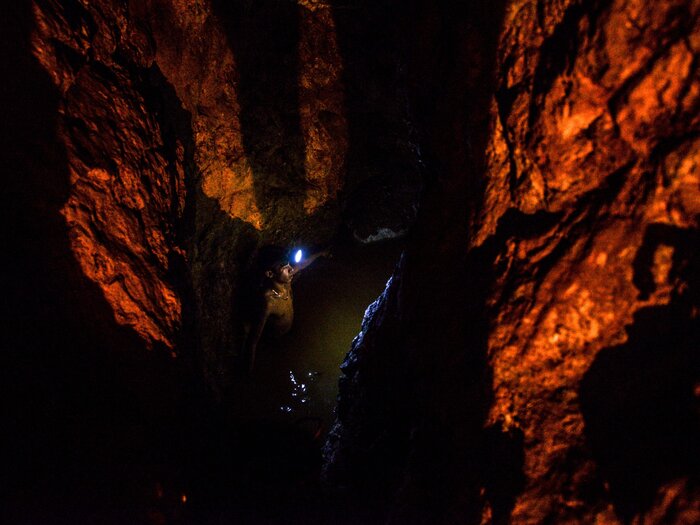 A miner looks for gold at La Culebra gold mine in El Callao, which sits in Venezuela’s Orinoco Mining Arc. Juan Barreto/AFP/Getty Images

“These miners have no labor rights at all,” says Phil Gunson, a Caracas-based senior analyst for the International Crisis Group. “They’re not protected from any of the dangerous elements — for example, the mercury that’s used in the mining.”

He adds that miners are “also severely at risk of being shot dead: Mining communities have phenomenally high homicide rates, even by the extraordinary high levels that we see in the rest of Venezuela.”

Getting reliable information is difficult because the area is highly dangerous for outsiders and locals are often too frightened to talk. Yet media and human rights activists portray a chaotic scenario in which armed gangs, fighters from Colombia’s National Liberation Army rebel group and elements of Venezuela’s military vie with one another for the control of mines, and use extortion and violence to co-opt independent miners.

“It’s the Wild West. I mean, it can’t be overstated just how lawless a lot of the territory is in this Orinoco mining belt,” says Geoff Ramsey, Venezuela specialist at the Washington Office on Latin America, a research and advocacy organization for human rights.

Much of the gold is smuggled out of the country. Anxious to shore up loyalty — after several failed plots to overthrow him — Maduro has allowed commanders from Venezuela’s military to get involved.

“In mining areas, we see the armed forces of Venezuela acting as a kind of gatekeeper,” says Ramsey. “They charge criminal groups for access to the mines.” 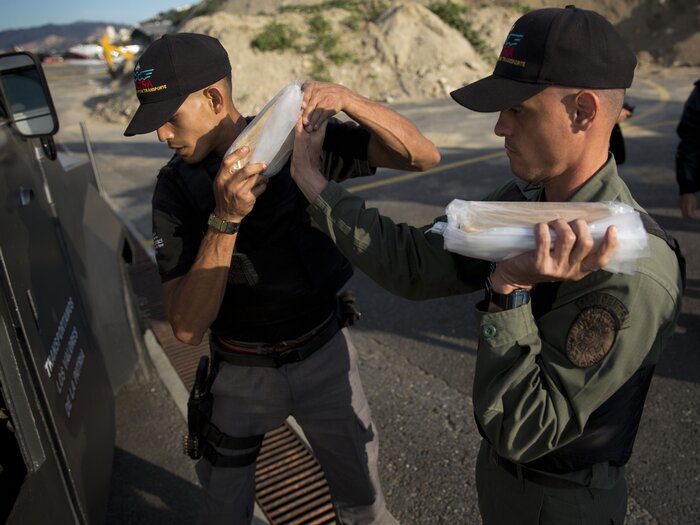 Members of a Venezuelan military agency that transports valuables put gold bars into an armored vehicle to be taken to Venezuela’s Central Bank, at the Carlota military airport in Caracas, March 1. Ariana Cubillos/AP

Environmental groups are deeply concerned. “They don’t observe any kind of environmental protection,” says Gustavo Montes, a Venezuela-based ecologist and environmental studies consultant. He estimates that, in 2016 alone, some 84,000 acres within the Orinoco arc were lost to deforestation.

Maduro’s attempt to dig his way out of trouble has now run into opposition from the Trump administration, which considers him a socialist dictator and is pressing for his ouster. On Nov. 1, the United States announced sanctions targeting Venezuela’s gold sector and banning U.S. entities and citizens from participating in it.

One week earlier, Marshall Billingslea, assistant secretary for terrorist financing at the U.S. Treasury Department, provided insights into the administration’s position on this. He told an audience at the Brookings Institution, a think tank in Washington, D.C., that Maduro has “turned to the wholesale, rampant destruction of the environment through strip mining on a massive scale of gold and other precious metals in the Orinoco Belt.”

Without the approval of Venezuela’s opposition-led National Assembly (which Maduro has entirely sidelined) or local indigenous communities, the Venezuelan leader has “promoted and promulgated a full-scale gold rush,” said Billingslea.

He continued: “We need to express moral outrage over what’s being done to the environment, what’s being done to the indigenous populations, and the fact that this gold is being removed from the country without any of the customary safeguards on it that would ensure that the funds are accounted for and properly catalogued as belonging to the Venezuelan people.”

The Trump administration’s move has been met with defiance by Maduro. The Venezuelan leader announced his government next year intends to generate $5 billion from the Orinoco gold mines. Industry analysts view this as wildly optimistic.

“The process of bringing a new mine from gold in the ground, to gold being sent to a vault somewhere is usually about 10 years. So, unless they were preparing for that in the previous decade, I think this is mostly talk,” Aaron says.

Maduro can take comfort from the fact that — however much gold his government eventually extracts — he has a likely buyer: Venezuela’s new friend and ally, Turkey.

Turkey has recently become one of the world’s largest gold buyers. This year it acquired more than 23 tons of Venezuelan gold, worth an estimated $900 million.

But it doesn’t fix the decline in oil production, which is the country’s real lifeblood.

This is further evidence of the warming relationship between Maduro and Turkey’s President Recep Tayyip Erdogan. Erdogan was among the first to congratulate Maduro when secured a new term in May, in an election condemned as fraudulent by much of the international community.

But as Venezuelans struggle to survive day by day, two questions emerge.

The first is, will U.S. sanctions on its gold make any difference? Opinions are divided.

Some observers fear they will drive Venezuelan officials — including the military — to resort further to the black market, where they’re already profiting from currency, food and other scams.

Others say sanctions are already making an impact, citing a recent Reuters report saying that $550 million worth of Venezuelan gold bars are now stranded in the vaults of the Bank of England.

And the other question: Even if Venezuela musters the annual $5 billion in gold its leader dreams of, what are the chances that can save his country from disaster?

“None,” replies Benjamin Gedan, a senior adviser to the Wilson Center’s Latin American Program. “If the Venezuelans generate a few billion more from gold, and the U.S. is ineffective in stopping it, that’ll maybe help them continue to service their debt for another quarter or two.”

“But it doesn’t fix the decline in oil production, which is the country’s real lifeblood. The only thing that can save Venezuela is an extraordinary increase in oil prices, and a complete reversal in its production trend.

“Neither of those things are likely.”